Preserving history and culture at the Haile Gold Mine

Home » Preserving history and culture at the Haile Gold Mine

Responsible environmental management is about more than just land, air and water. Whether it’s preserving artifacts uncovered on the mine site, relocating an old schoolhouse, restoring a historical train depot, or protecting the resting place of the community’s loved ones, the Haile Gold Mine is focused on being good stewards of the area’s cultural resources.

The team at the Haile Gold Mine have been working with cultural resource management firm, R.S. Webb and Associates, who have recently completed archaeological work at the site and discovered many interesting archaeological pieces.

Senior Archaeologist Ken Styer said a person would have to have a unique passion for artifacts to appreciate the kind of items found, but that the historical significance was great. The objects paint a picture of the earliest inhabitants of the area and their activities.

“What many commonly call ‘arrowheads’ are more appropriately called projectile points in the archaeological world. Not everything that looks like an arrowhead was used on the end of a spear,” Styer said.

“Most of these are multi-purpose tools for a cutting edge or a dart or spearpoint. Some are more of your scraper tools,” he said.

Arch site 642 at Haile is a large area that presented physical integrity (has not been disturbed) during early testing. According to Styer, this means initial phases of shovel testing indicated that there were enough artifact clusters to be able to collect usable data.

“The vast majority of everything we get is lithic (stone) tools or lithic tool related. Ceramics are in the upper levels [of the timeline] about 3,000 years later,” Styer said.

The Woodland period of the timeline, which began about 1,000 years ago, is the first known appearance of the various pottery items Styer refers to.

The Haile Gold Mine contracts R.S. Webb and Associates when digging is planned for previously undisturbed portions of the site. To protect the site’s cultural resources, the firm comes in and excavates all significant and potentially datable items. Once their work is complete, the mine proceeds with clearing the area.

“Archaeological excavation methods are very labor intensive. We come out and do a survey, then line up every 30 meters and dig a hole and screen the dirt. You move down the line every 100 feet,” Styer said.

The standard field excavation procedure calls for the removal of dirt in unit levels at 10-centimeter increments. Using a shovel, dirt is carefully removed from each level and placed into a 2×3 screen box, which pivots on one leg. The box is shaken forcefully back and forth to screen the loose soil through the mesh. Anything remaining on the screen might be something worth getting excited over. 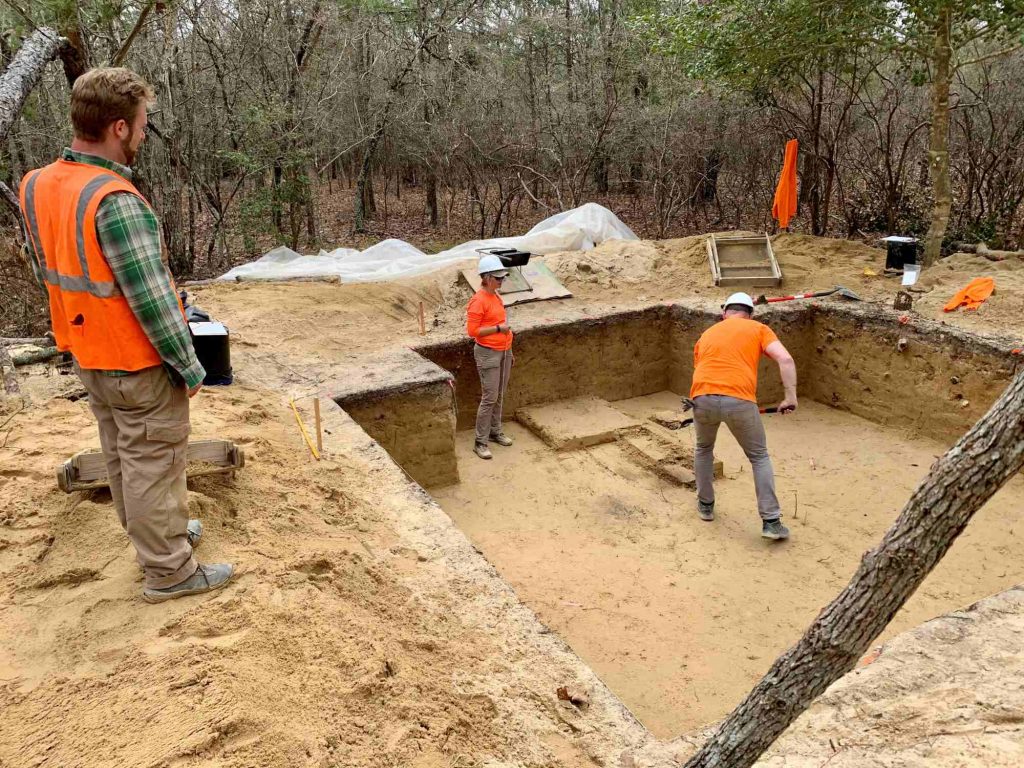 Photos: Removing dirt in a standard archeological procedure that involves excavating at 10-centimeter increment and sifting it in a screen box to locate solid objects. 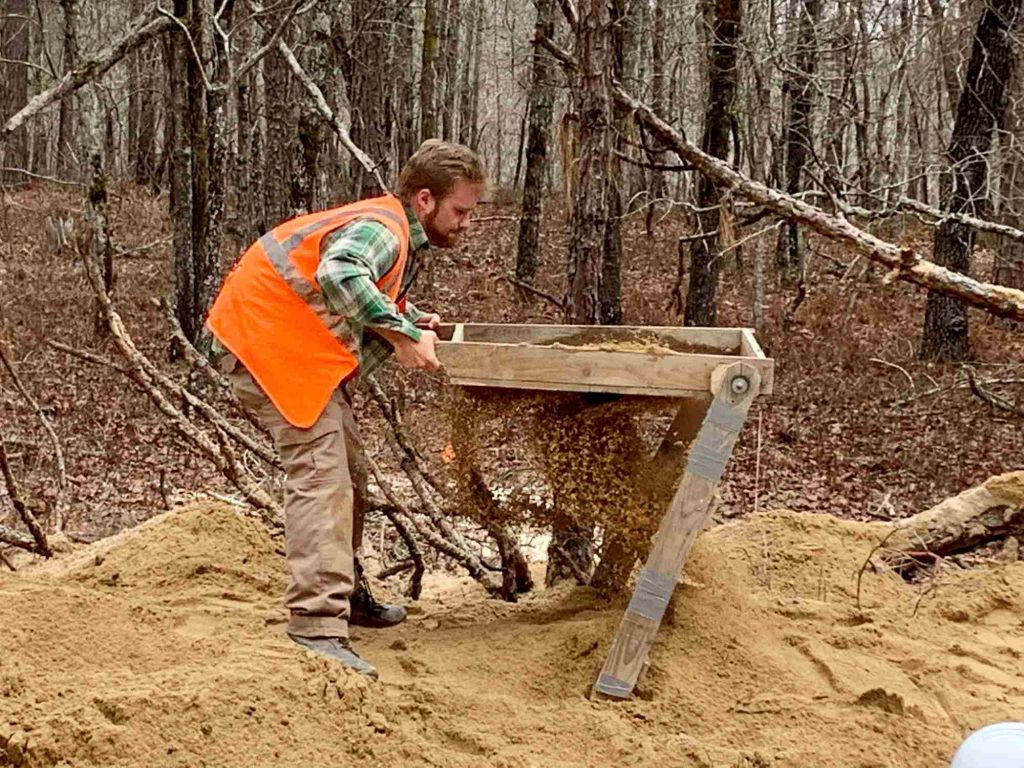 “I’m liking these sites. I’ve worked up in the sandhills for a long time, and you find a lot of sites but it’s hard to find any with physical integrity. Things just filter on through. Finding intact deposits is very exciting,” Styer said.

The excavation process doesn’t always have to start from scratch. The area is full of other known sites where stories of discovered arrowheads and the artifacts themselves are passed down from generation to generation. When this is the case, less shovel testing is needed as the group can more easily pinpoint the location of artifacts.

At the completion of excavation, Styer and his team return to their lab in Georgia to begin analysis.

The goal is to more accurately identify the period using the radiocarbon dating method and quantify the findings. Broken pieces of cooking stone were some of the more interesting findings during the recent dig. According to Styer, the stone would have been placed on top of a fire to heat up the food.

“I have never seen one out of sandstone. Usually, what you’ll get is steatite, which is soapstone, that you’ll get in the Piedmont. It’s definitely a little bit exciting,” Styer said.

Field analysis of the stone indicated that it had been penetrated at the center, which Styer said could have been to help facilitate carrying it around.

The group also discovered chunkey stones on the property. These disc-shaped stones were used in Native American cultures as a game with a lot potentially on the line. The stone is first rolled across the ground and participants threw spears at the stone to see who could get closest. Anything from food and blankets to a participant’s entire home could be at stake.

Evidence of this type of activity helps determine the type of inhabitants in the area. Styer said as far back as the Haile artifacts go, it’s impossible to associate with any known tribes.

“The North American continent was inhabited 14,000 years ago by people chasing mastodons and bison. They were all strict hunter gatherers. At a mobile camp, you won’t get cooking stones,” Styer said.

“This site is more the tail end of hunter gatherers. Here, they are spending a little bit of time,” he said.

Upon completion of all artifact analysis, items are returned to the Haile Gold Mine Depot and are on display for all the community to enjoy. 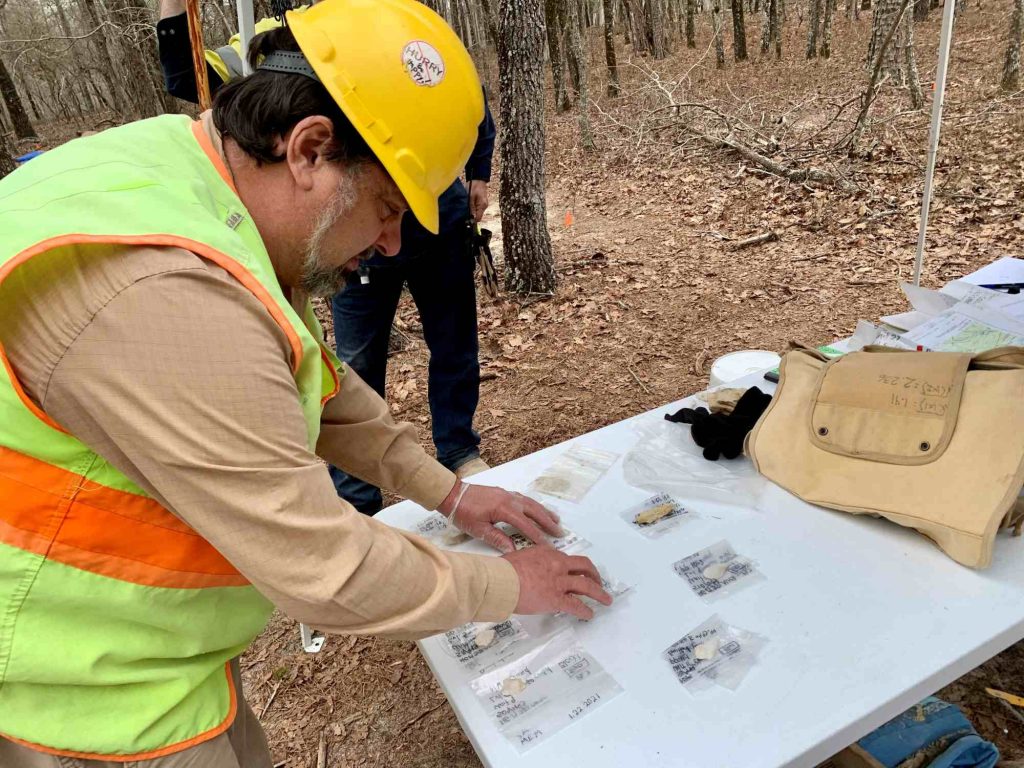 Photo: Ken Styer of R.S. Webb and Associates displays some of the projectile points found at the mine during recent archeological excavations.