As part of OceanaGold’s biodiversity studies supporting the proposed Waihi North Project, one of New Zealand’s living fossils has received some of its most in-depth attention to date.

The Archey’s frog is a living fossil, largely un-evolved from 150 million years ago, and is one of New Zealand’s only native frog species.

The endangered species is about the size of your thumbnail and is currently found in only three locations throughout the Waikato.

One of those locations is Wharekirauponga, where OceanaGold’s Waihi Operation is proposing to develop an underground gold mine.

As part of the mine consenting process OceanaGold has to provide enough information to demonstrate that the proposed mining activity will not have a negative impact on the frogs habitat and population. 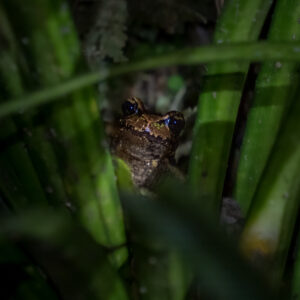 With limited existing research to give insight, OceanaGold has assembled a team of highly experienced conservationists to get to know the species better than ever.

What has resulted is some of the most insightful research collected on the species to date and literally seeing more than ever before of this notoriously hard to find amphibian in its natural environment. This research suggests suggest the amphibian’s numbers on the Coromandel Peninsula are estimated to be 54.8 million.

“It has to have been raining, reasonably warm and at night before they show themselves”, says Cassie McArthur, OceanaGold Senior Environmental Advisor. “You think you’re never going to find them and then there they are!”

Cassie, a former Department of Conservation ranger, has been deeply involved in the study on the frog species for the past two years.

“Before we started this work there had only been limited and sporadic research, but now our understanding has grown exponentially. OceanaGold’s commitment to preservation and bio-diversity means we now have the knowledge and resources to ensure clear ways to protect and help see the Archey’s frog thrive”.