Gold at Macraes is known as ‘refractory ore’, which means it is ultra-fine and resistant to the typical cyanide leach process.

The following sections outline the mining cycle at Macraes and provides some insights into the unique approach of the operation and what sets it apart from other mines around the world. 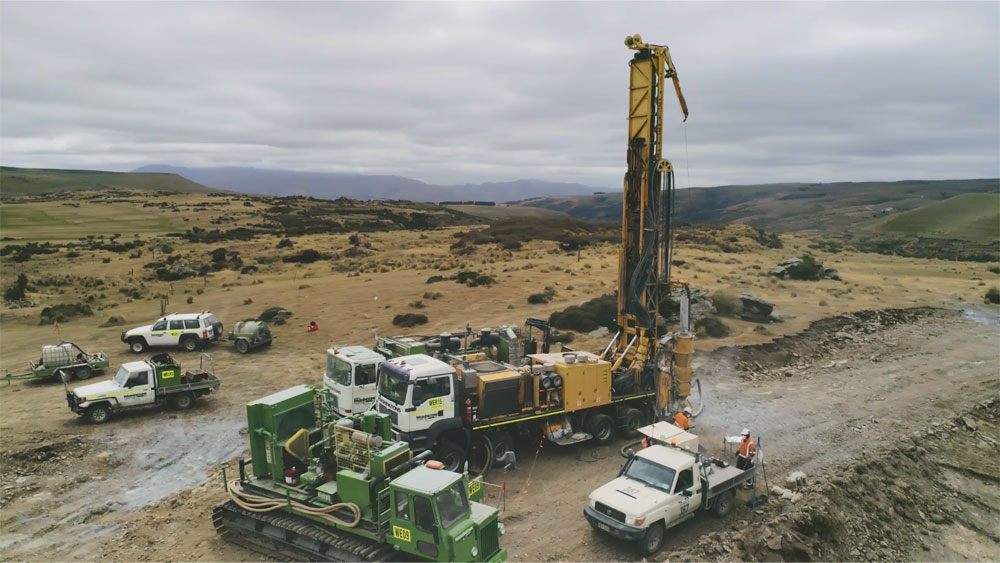 If positive results are found, exploration activities move into an initial phase of drilling. Drilling involves intercepting the potential ore body at different points around the zone of interest. This provides samples of the rock to help draw reasonable conclusions about the potential resource in the target area. Drilling information is used to quantify the initial exploration findings and determine the size and scale of a potential resource. If there is enough information, this may be defined as an inferred resource, the first of three levels of confidence needed to establish a completed mine plan.

Upon completion of a resource estimate with high level of indicated and measured mineral resources, the resource estimate is handed over to the mine engineers to develop a plan for extraction (either via open pit or underground methods) and assess the economic viability of the mineral resource. If it is economic to extract the resource, it will progress through the mining cycle.

Exploration is ongoing throughout every aspect of the active mining cycle and is used when extending or returning to known resources. Continuing to develop and de-risk potential resources helps to extend the life of an active mine.

The findings from exploration drilling are then used to develop what we call a resource model. This provides the information we need to work out where to mine. Tall, wide steps called benches are drilled to define ore (rock which contains gold) and waste (rock which does not contain economic quantities of gold), and then the area is blasted. This breaks up the rock and makes it easier to transport. The ore and waste areas are marked out and a fleet of excavators and dump trucks mine each area separately. Waste rock is transported to a waste rock stack which is rehabilitated or used to stabilise and fill previously mined areas. Gold bearing ore is transported to stockpiles ready for processing.

The low-grade ore found at Macraes has driven investment in new and innovative technology and engineering, making the operation more efficient. The low unit costs remain essential for the Macraes Operation as the ratio between the amount of ore dug to the amount of waste rock dug is 1:10 (also known as the stripping ratio). So, to put this in perspective, to obtain one to two grams of gold the open pit mining operation must move 11 tonnes of rock.

Once the mining area is completely defined, a portal entrance is cut and surface infrastructure is established (up to six months). A long tunnel called a decline, a return airway, and branching lateral access drives are then developed to reach the ore (two months to several years). Normal lateral ore development and production cycles commence after the main tunnel is established.

Infill drilling is used to further define the position of the orebody at a higher resolution and increase the accuracy and resolution of the geological model, which the mine design is based on. Grade control drilling and stoping (mining of the ore) take place along the lateral development drives. This provides material samples used to determine the exact grade and nature of the ore.

A development cycle of drilling, blasting, bogging and ground support is used to develop the tunnels. Blasting is required to fragment (break up) the rock prior to excavation (taking the rock out) by low profile excavators called boggers. Once stope production begins remotely operated boggers are used to eliminate the exposure of operators to rock falls and other hazards. Trucks haul the material to the surface where it is transported to the ROM (Run of mine/mill) pad, destined for the mill. An excavator removes any residual steel or explosives before it is fed into the mill for processing.

Gold at Macraes is known as ‘refractory ore’, which means it is ultra-fine and resistant to the typical cyanide leach process, typical of most gold processing plants. This refractory nature of the ore led to inefficiencies recovering the gold from ore in the past. The ore now goes through a three-stage processing cycle to ensure the gold is economically recovered from the ore.

Ore stockpiled from underground and open pit mines is fed into the primary crusher at the process plant. The jaws inside crush the rock down to fit through the 125mm gap at the bottom. Crushed rock then travels to the mill. As the mill turns, steel balls inside are lifted against the mill walls and fall onto the rock to crush and grind it even further. At the same time, water is pumped in to turn the crushed rock into slurry. The slurry is pumped into the primary cyclones (used to size the material). Coarser material falls to the bottom and returns to the crushing/grinding cycle while the lighter material spins up to the top and is pushed over onto the next stage.

The flotation unit cells are the first opportunity to separate gold bearing ore from waste rock. The main material mined at Macraes is sulfide ore (containing gold particles). SIBX (Sodium Isobutyl Xanthate) is pumped into the slurry and causes the gold particles to bond with the sulphur inside the rock. Air is used to agitate the slurry and float the gold bonded sulphur over the top of the tanks onto the next stage. This process is repeated to concentrate the gold bearing ore and separate it from the waste rock (increasing the grade of the ore). The flotation units catch 70% of the gold collected at Macraes, with the primary roughers collecting the other 30%. The slurry that doesn’t contain any gold is neutralised and sent to the tailings dam. The concentrate is thickened and then fed into the autoclave to break the bonds between the sulphur and gold, replicating natural oxidisation. The gold is liberated through the reaction between oxygen and sulphur under pressure. Once the reaction starts, fresh slurry is fed into the autoclave and oxidised slurry is discharged to the next stage of the cycle.

The oxidised slurry travels to the carbon leach circuit to dissolve the gold out of the rock. It travels through a series of gravity fed tanks filled with sodium cyanide, with higher concentrations at first and weaker at the end of the line. The sodium cyanide leaches the gold from the rocks turning it into a liquid. It can take three to four days for a particle of rock to travel through the tanks. By the time the rock particle reaches the last tank, 98.5% of the gold is recovered. At the same time, activated carbon (coconut husks) are pumped upstream through the tank system to catch the leached liquid gold. Once full of gold the carbon travels to a gold desorption column designed to wash the gold out of the carbon. When this process is complete, all that is left is eluate containing hot water, gold solution, cyanide, and caustic soda. The eluate is transported to the gold room and electroplated onto cathodes wrapped in steel wool. The steel wool is then melted in a furnace and causes the gold to sink to the bottom and remaining waste (slag) to rise to the top. As the bar is poured, the slag pours out, followed by the gold, causing the slag to overflow out of the mould, leaving behind the gold. A sample is taken to send to Perth Mint to determine the quality before the gold bar is then removed and cleaned. It is weighed and numbered before being shipped to Perth Mint.

A key decision point early in the mine design process is deciding what the final land use for the disrupted land will be. In the 30 years of the Macraes Operation, different land use has been investigated, including displaying heritage artefacts and creating wetland walking tracks. However, the dominant theme has been to return most of the land to extensive farming land for sheep and cows. Significant effort has since been put into the rehabilitation of mined out areas to create productive farming land. 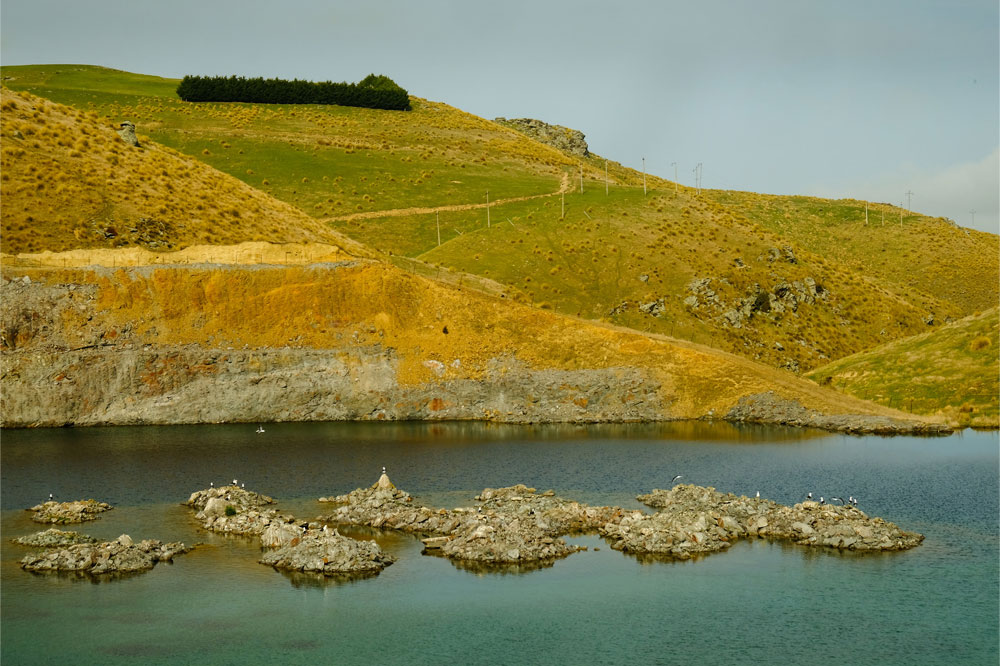 Rehabilitation is not only the practice of generating a final land use after closure, but it also assists in minimising other impacts from the mining development. These include impacts from erosion and sediment loss where vegetation and soil are disturbed, and effects the land on a broader landscape. Where possible rehabilitation is done progressively (i.e. as the mining operation is developed, to limit the extent and duration of those impacts).

At the time of mine planning and design, and prior to development, an assessment is conducted which includes the current values of the land to be developed (i.e. pastoral and ecological values). From this a decision is made on the proposed final land use for the area post mining. The assessment also investigates what rehabilitation materials are available and what is required to meet the final land use. Rehabilitation materials generally include oxidised schist (also known as ‘brown rock’), which is used for a subsoil and topsoil. Once volumes of rehabilitation materials are understood, stockpiles are designed for the stripping or removal of these materials before the digging of waste rock begins.

Where areas on waste rock stacks or other disrupted land is prepared, brown rock and topsoil can be placed directly without the need for stockpiling. This is particularly important in the management of topsoil as it ensures the overall fertility of the soil is preserved. Revegetation of disrupted areas follows the placement of topsoil. The type of plants used in the revegetation depends on the final intended land use of the area. Historically the Macraes Operation has used a seed mix of pasture species used in the local area.

In addition, rehabilitation planning, which assesses the effects of the mine development on the landscape is also undertaken. This assessment includes the visual effects during mining, after mining and after rehabilitation. To limit the post mining landscape effects, waste rock stacks are shaped in such a manner to blend in with the surrounding landscape. This is achieved through a series of measures, including shaping slopes to match nearby natural slopes cross-profile, having slopes no steeper than nearby natural surfaces, rounding formed surfaces so they transition into natural surfaces and maintaining a varied and curved skyline, simulating natural skylines.