Modern Haile Gold Mine brings economic renewal to the region

In the years since the reopening of the Haile Gold Mine in South Carolina, OceanaGold has found itself at the center of an economic renewal in the rural, historic region.

It has been nearly 200 years since gold was first discovered on the property of Captain Benjamin Haile in South Carolina. Today, OceanaGold’s modern day Haile Gold Mine carries on area’s long tradition of pouring gold using the very best state-of the-art and environmentally conscious technology and techniques.

OceanaGold celebrated the first gold pour at the modern Haile Gold Mine in 2017, starting a new chapter in the rich history of the region. Less than a year later, researchers with the prestigious Darla Moore School of Business at the University of South Carolina released a detailed analysis of the Mine’s socio-economic impact on the area, taking into account the anticipated life of the operation. The economic impact report concluded what local residents had been saying in recent years: the modern-day gold mine was breathing life back into an economically declining town.

Kershaw, South Carolina, has a population of around 2,400 and sits less than 6 miles from the processing operation at the mine. Although gold mining is part of the town’s history, its economic roots were in textiles. In the mid 1970’s, like in many other parts of the country, the textile industry began to close factories in the United States and move their operations overseas. Kershaw was not immune to the drastic economic shift, and the town’s residents soon found themselves out of work and forced to look elsewhere for jobs. The locally owned small businesses that once provided support to the community started to close, the houses and streets started to empty as families moved away, and the town itself seemed to grow quieter. For the following two decades, Kershaw would fight for its survival. Then in 2007, gold was rediscovered at Haile, and Kershaw was given a new chance at prosperity.

In 2021, with Haile Gold Mine at the heart of its economic renewal, Kershaw finds itself invigorated and looking brightly towards the future. With more than 800 people (including contractors) working at the 24-hour mining operation, families are moving back to the area, new businesses are opening up, and renewed hope for this small town has sprung forth.

The numbers back up this renewed sense of hope. According to the Economic Impact Analysis, the Haile Gold Mine generates US$87 million each year in positive economic impact to Lancaster County, where the mine is located. According to researchers, the US$87 million “figure reflects the dollar value representing all final goods and services produced in Lancaster County that can be attributed (either directly or indirectly) to the mine’s operations. This impact corresponds to 367 jobs and US$26 million in labor income that would not exist otherwise.”

“When expanding the analysis parameters to include the surrounding four-county region (Lancaster, Kershaw, York, and Richland counties), the economic impact of the Haile Gold Mine increases to $162 million annually – which is associated with 684 jobs and US$48 million in labor income.”

Widening that analysis to the state of South Carolina, researchers concluded the Haile operation generates US$191 million in positive economic impact each year.

That positive economic impact stems from significant investment in reopening the Haile Gold Mine. Since 2007, more than US$1 billion has been invested at Haile. In that same timeframe, the total payroll has topped US$200 million. That figure does not include the number of indirect jobs generated by the Haile Gold Mine which University of South Carolina researchers estimate is sizable.

According to the report, “Although the Great Recession that occurred from 2007 to 2009 caused massive employment losses in Lancaster and Kershaw counties, these counties also experienced zero positive employment gains during the five years leading up to 2007. By contrast, between 2009 and 2016, employment growth in both counties have consistently outpaced the statewide average. These major changes in employment patterns have been due in part to the economic activities associated with all exploration, permitting, and construction that has been taking place.”

The people holding these jobs are shopping at local stores, buying homes and revitalizing the area. That same influx of economic activity has continued during the past four years of commercial operation at Haile, including during the 2020 global pandemic. Now in 2021, the Haile team is looking ahead at the possibility of an expanded operation and additional investment.

OceanaGold has submitted an application to commence underground mining at Haile. If approved by federal and state regulators, underground mining would generate an additional 200 direct jobs on site and capital investment of US$110 million – further growing the Haile Gold Mine’s economic impact in the region and its significant place in history. 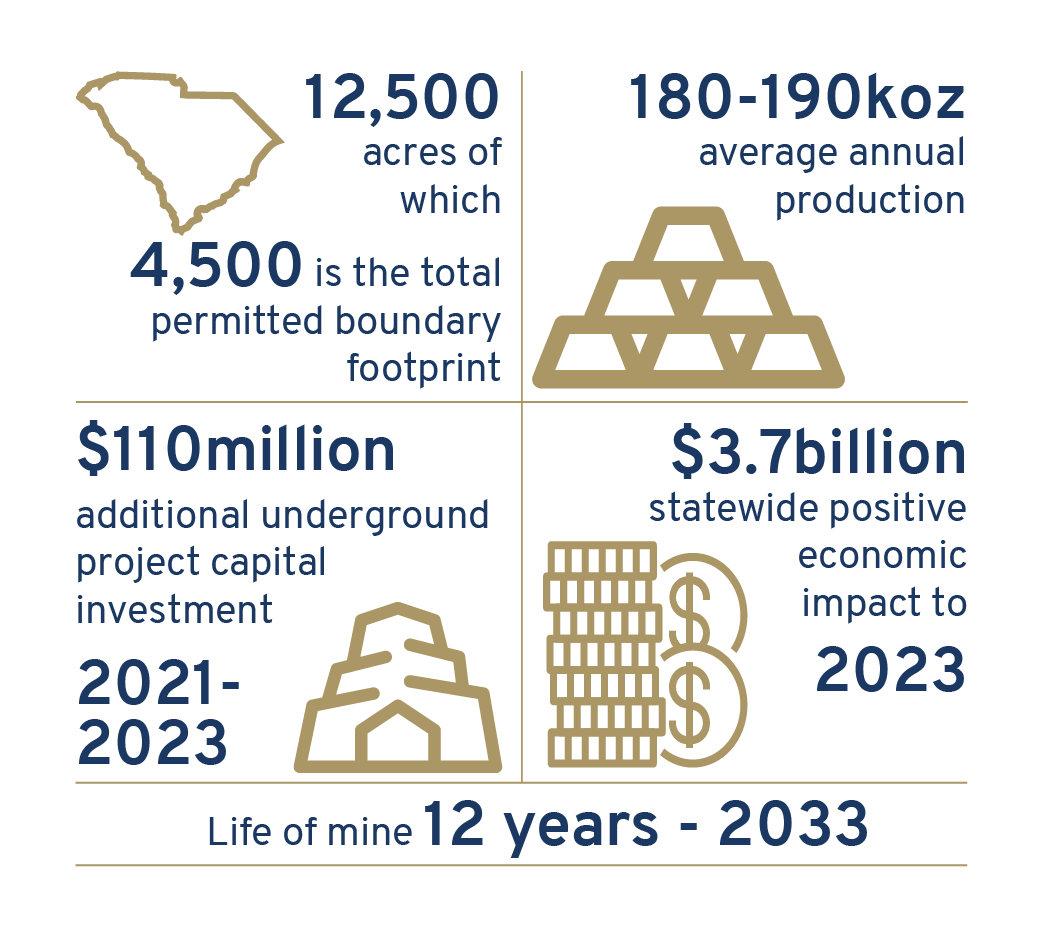